For international TV and directors

July 2020 / Winner Lizeth’s short documentary ‘Two More weeks’ on the category of Best short Documentary by the Film festival ‘Independent Shorts Awards’ an international festival based in the United States.

August 2019 / Selected Lizeth’s short documentary ‘Pre Inca music is back’ by the National TV channel of Peru to be shown at the TV Program Cortos IPE. Lizeth was also interviewed at the TV to share about her career and how she jumped into this industry.

June 2018 / Finalist Lizeth’s short documentary ‘Stopping the violence’ which shows a case of overcoming domestic violence in Peru on the contest organized by the Embassy of Belgium in Peru.

December 2016 / Winner Lizeth’s one minute short ‘Best motivating phone call to an English’ by the contest carried by the British Council in Peru through the topic ‘Shakespeare Lives campaign’. 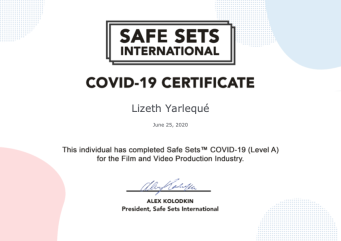 Lizeth’s filming work has been done for:

Lizeth’s production/fixer work has been done for projects aired on: